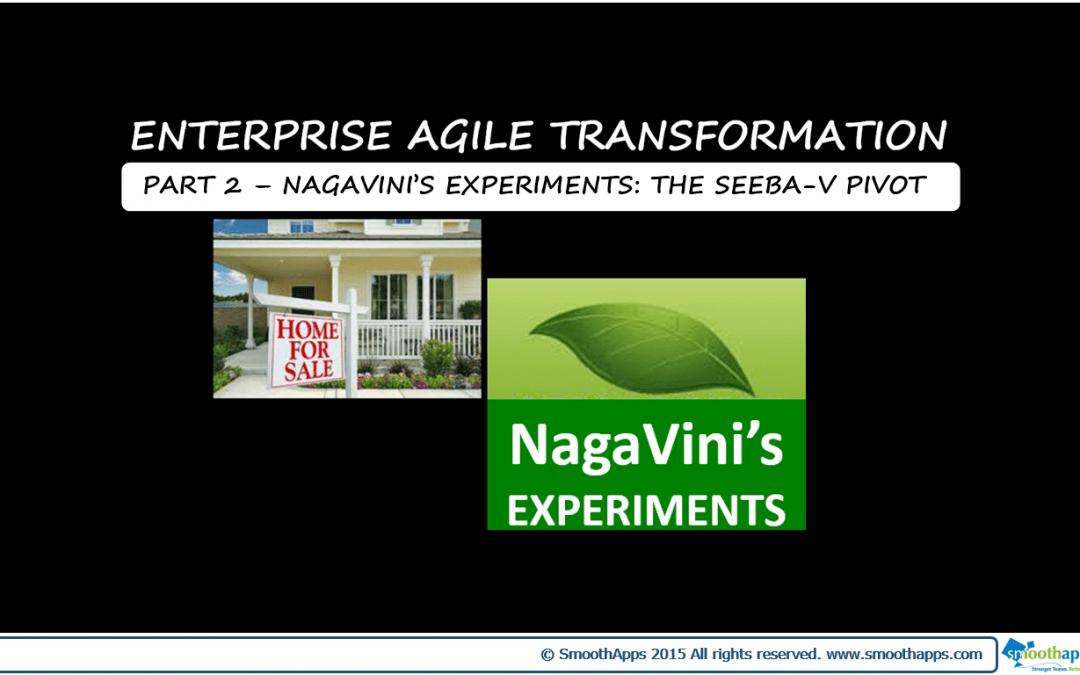 This blog is the sequel to my earlier blog – Enterprise Agile Transformation Part 1 – The Story of BB Watt’s Lawn Service. In Part 1, I told you the story of my friend Walt and how he got fired as the President of his HOA.

After being fired, Walt was in the doldrums. I found myself spending more time than usual hanging out with him at our local Starbucks. He had no clue what he did wrong or what he could have done different. He felt terrible about his mistake and wanted to make it up to his community. He decided to dip into his 401K account to try and make things a little better for his community.

We asked around to see who might be able to help us and a name kept coming up – NagaVini’s Experiments. The founders – Naga & Vini were respected by all their clients. They had a reputation for being somewhat eccentric but they got results. NagaVini’s was a polarizing company – you either loved them or hated them. In fact, those who hated them often called them uncompromising zealots who refused to compromise on their principles and methods.

SEPARATION OF CHURCH AND STATE

We met NagaVini and Walt started explaining how he wanted them to solve his problem. They immediately interrupted him and told him it was not his job to tell them how to solve the problem. They created a working agreement where Walt would own the What and Why of the problem and NagaVini would own the How. It was like a separation of Church and State.

They began by assessing the properties for sale in Walt’s community. There were 52 homes for sale. We had to decide where we would begin. There were 2 entrances to the community – every home-buyer had to enter the community from one of these two points. There were 7 homes that for sale along these entrances. NagaVini decided to narrow their focus from 52 homes to these 7 homes. If we were to stop home prices from their free fall, these would be the most valuable homes to begin with.

Next, they started assessing the risk. It turned out that 4 of these homes had owners who were very close to foreclosure. Foreclosures are terrible for a community because banks are eager to sell quickly and the sale often drags down prices for the neighborhood. They narrowed down the focus further and ranked these 4 homes at the top of our to-do list. These 4 homes went to the top of their backlog and others were ranked in order as well.

All these homes had terrible curb appeal. The yards were overgrown and full of weeds. It seemed like a reasonable hypothesis that if we just gave each home owner a lawn mower, the problem would be solved. However, they chose to validate / invalidate the hypothesis by having a series of conversations. They also had a strange habit of asking Why repeatedly – sometimes as many as 5 times, as they peeled the onion to get to the bottom of the problem before they started solving it.

This aggravated Walt no end because he was an aggressive, Type-A, take charge, take action kind of a guy.  He tried to push them around, but they wouldn’t have any of it. “A mediocre solution to the right problem is better than the perfect solution to the wrong problem”, they reminded Walt.

NagaVini spoke to each of the Top 4 home-owners to better understand what their challenges. They refined the hypothesis about what might help sell those homes and designed customized experiments to test each hypothesis.

NagaVini knew that Walt had invested his personal funds, so they wanted to manage the risk of failure. They partnered with a respected local realtor – Elaine to better understand the domain. It turned out that there were many indicators that could be used to measure if their hypothesis was valid or not. If they were to fail, they wanted to fail fast, learn and adapt.

Elaine explained some indicators that could be monitored…

NagaVini next started acting based on home-owner conversations and advice from Elaine to improve curb appeal and take other action to boost interest in the community. Not all their experiments worked, but thanks to the approach of monitoring leading indicators, whenever the desired result deviated from expected result, they were quick to inspect and adapt. Pretty soon, they seemed to get a solid feel for what the typical home-buyer wanted.

There were more hits on Trulia, more requests for information and appointments, more visitors on open house days and more offers. Within a few weeks, all 4 homes got multiple offers and were sold at a higher than average price for the community. The community appreciated the risk Walt took on their behalf and he got fewer glares when he went out for a walk with his dogs.

Encouraged by the initial results, the HOA hired NagaVini for small contracts, a few homes at a time until more and more homes got sold. Now, the community looked nicer and there were fewer yards that were messy. The community self-organized and started speaking to those outliers. Peer pressure worked, the tide had turned. The experiment had succeeded and had taken root in the culture of the community.